Here's another repost. Updated for 2011, this post was originally from April 2010. 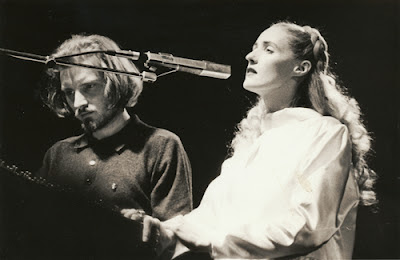 Another "band" from the good old days: Dead Can Dance, now barely remembered, tossed into the dustheap of unhip history. But they were an important moment in the soundtrack of my life in the late eighties and nineties. How to describe Dead Can Dance without using tired descriptors? They were/are a British/Australian duo who released seven albums between 1984 and 1996. Their early (1980s) work was primarily dedicated to excavating ancient and medieval European music from the grave of academic pretension and translate it for the arty underground/goth music scene of the 1980s. But Dead Can Dance were definitely not a goth a band. Their ambitions were much more limitless; their music encompassed everything from Gregorian chants ("De Profundis") to faithful renditions of 13th century music ("Saltarello") or 16th century Gatalan tunes ("The Song of the Sibyl"). They had a song called "Echolalia" and used glossolalia in their music. Some have called their music Neo-Medieval, whatever that means.

Later in their career (1990s), they moved more into what folks today call "World Music" and away from their medievalist roots. But the music still holds up remarkably well. They were an important aesthetic influence on my musical education, although they were in many ways antithetical to almost every other kind of music I listened to at the time. Through Dead Can Dance, I learned to be cautiously open to intellectual pretension. I understand that there's a thin line between intellectual aspiration and pathetic (and bathetic) parody, but for some reason, I never placed Dead Can Dance in the latter category although many other bands or artists were not spared my scorn. Dead Can Dance felt incredibly earnest even as they collapsed time (centuries) and space (continents) into tidy album-sized chunks with lyrics that would not be out of place in Chaucer.

Brendan Perry, one half of Dead Can Dance, was someone who played in punk bands as a kid but having been influenced by the post-punk of P.I.L. and Joy Division took a complete left turn into more expansive music. Lisa Gerrard, the other half, is someone who you imagine should have done her Ph.D. in Medieval Studies in a small liberal arts college in New England. She looks tiny, frail, wispy, and proper. She later scored the music for the film Gladiator. 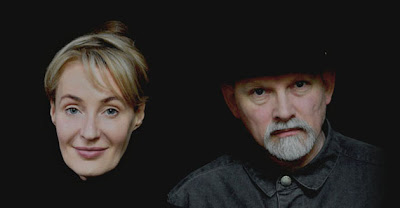 I like all of Dead Can Dance's albums but my two favorites are Within the Realm of a Dying Sun (1987) and The Serpent's Egg (1988), partly because these were the first two I heard. I still have both of them on vinyl and they sound beautiful, if a little strange. If I had to generalize, the former is based around melody and the latter around percussion, but both sound like nothing out of the twentieth century. For their latter, "world music" phase, I would recommend Into the Labyrinth (1993), probably their most successful album in terms of sales. Going more into territory that the Real World Records label was promoting, this album is impeccably produced but sounds a bit like two people who happened to accidentally put their (very) different songs on the same album. It was clear by this point that Perry and Gerrard were heading in different stylistic directions (and apparently didn't get along much either). Since then, Gerrard has had a fairly successful solo career contributing to movie soundtracks, having a beautiful voice worthy of sirens welcoming you into heaven.

Recently, Perry and Gerrard have decided to re-activate Dead Can Dance. Their new album Anastasis is due in August 2012 and the band is about to embark on a massive world tour (New York on August 29 and 30!). As preparation, they have released 21 live recordings from previous tours free on their website under the generic title Live Happenings. Many of these live songs remain "officially" unreleased on any album.

Here then, are three random selections from the Dead Can Dance oeuvre.

Here is "Saltarello" from the album Aion (1990), which refers to a dance first recorded in Napoli in the 14th century:

Here is "Echolalia" from the album The Serpent's Egg (1988). "Echolalia" literally means "the automatic repetition of vocalizations made by another person."

Here is the band in the latter day / world music phase with a song called "Rakim," actually only released in a live version on the album Toward The Within.

[Quick update on the back-and-forth between this blog and the band Asteroid #4: World Peace has been restored. We had a summit meeting at Camp David, representatives were sent, negotiations were had, hands were shaken, and water has now passed under the bridge. Also, the band has generously and free-of-charge shared their most recent albums with Joy of Speed, which is cool, so there will be a review sometime in the near future!]

Now back to regularly scheduled programming: I've mentioned Lotus Plaza on this blog before on one of my various long rambling posts on the whole Deerhunter family, but I couldn't resist one more mention. I fucking love Lotus Plaza's new album entitled Spooky Action At A Distance. Just to reiterate, Lotus Plaza is the side project of Deerhunter guitarist Lockett Pundt, who from what I can tell is the "quiet and shy one." Where Deerhunter operates like a fullscale rock band with a gamut of influences and tools, Lotus Plaza communicates a more private sensibility. The music is not necessarily innovative, but it's beautifully executed. It's mostly a variation of shoegaze pop, maybe harking back to bands such as Ultra Vivid Scene from the late 1980s, with bits and pieces of Stereolab thrown in, especially in the way in which the band finds bliss in repetition. Lockett has a crazy talent for mesmerizing minimalism: repeated riffs pummel your brain and unmoor you from the ground and put your head in a haze. The obvious touchstone here is My Bloody Valentine (Isn't Anything more than Loveless), but Lotus Plaza is much more poppy. And I gotta admit that this is album is very romantic, wraps you in a kind of swooning romance that is perfect if you're happy and in love, with just a hint that what you got is not gonna last too long, but you might as well enjoy it. This is one of my favorite records of this year so far. Definitely in the top five.

As a footnote, Spooky Action at a Distance is not Lotus Plaza's first album. Back in 2009, Lockett released The Floodlight Collective. I wouldn't recommend that first tentative debut, mostly because the production is so muddled that you can barely make out anything. I've read that he wanted the album to be vague, but it's a little too disjointed, and sounds like music made underwater with a cassette player.

"Jet out of the Tundra"

Other reviews of the album here and here.
Posted by spaceman at 12:50 AM No comments:

Readers will note that I took down two mp3 files from band Asteroid #4 at the request of the band. (I posted them originally here). I have to admit that I'm disappointed that the band asked me to do this. Let me explain: (a) My blog post was intended to promote the band, not to exploit it. I did not post a whole album or anything, or link to some torrent site or some shit like that. I also pointed to links where readers could PURCHASE their albums for (real!) money. This is how people discover new music these days. They stream music or download an mp3 or two from a band, check it out and decide to investigate further. (b) I was under the (obviously misplaced) impression that The Asteroid #4 are a bunch of cool dudes, not part of some massive faceless corporate force ready to come down on people who like their music (or want to expose others to it). But apparently they are not. Either way, I still like their music but I'm severely disappointed in them. (Admittedly I am not that important to their big rock star world, but I had to get that off my chest).

EDIT: See Lotus Plaza post above for update.
Posted by spaceman at 10:38 AM 12 comments: 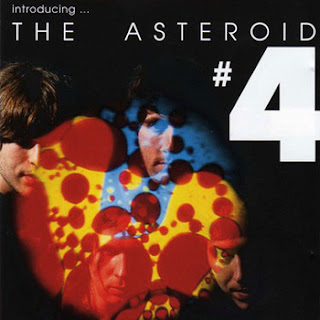 My old favorite band from Philly, Asteroid #4, used to be this weird whimsical band in the vein of late '60s psychedelia. They put on fantastic shows and put out a great album (Introducing....The Asteroid #4) in 1998. I discovered them when a friend and I showed up at the record release party for Spiritualized's Ladies and Gentlemen We Are Floating in Space, which was held at the Trocadero, the best place to see live music in Philly. The band (Asteroid #4) were four typical college-looking guys who launched into spasmotic space rock, even introducing a flute player at one point. They had totally ridiculous lyrics and deadpan faces. It was loud, melodic, with lots of feedback. It was actually pretty funny.

I saw them a few more times but lost track once they veered into a cul-de-sac of imitation; they started getting obsessed with mid-period Byrds, especially the canon of Gram Parsons. It's not that I don't like Parsons' music, but more that it was a tired move for them, and they didn't do it very well. However, at some point, they made their way back to Spacemen 3-influenced music, and from what I can tell they have two albums about to come out this year (2012), which by my count would be albums number 8 and 9.

One thing that was lost in the shuffle through their albums was their one-off non-album single from 1995, "The CIA Took My Dog Away" b/w "Mellow Beach," two spectacular tracks that perfectly encapsulate a kind of false nostalgia for never-really-existed late '60s English psychedelia. Lots of killer melodies, fake British accents, Traffic-like folk, and Syd Barrett-era weirdness, and throw in some My Bloody Valentine-guitar, and you have these songs. They never did anything quite as good after these couple of songs, which unfortunately remain unreleased on CD, although they are featured on an mp3-only collection of singles, b-sides and rare tracks that is available from their website here. For just $8, you get a 21 songs (!) covering all this early period Asteroid #4. It's a total bargain. Although I should say that the real treat is, however, their debut album, Introducing..., which is a bona fide space rock classic. They make no pretensions to be original, but they take their alien mythology very seriously. Get the debut here.

Update: tracks removed upon request of the band (or someone representing the band)

Long Live Philadelphia.
Posted by spaceman at 12:26 AM 2 comments: