The first song by Low I heard was the following, "Shame." I saw them live in the late nineties when I was living in Philly, opening for the Swans down at the Trocadero. They had a certain aesthetic, combining silence and understatement with violence and frisson. In the continuing search for my "this-is-how-i-feel" moments in music, I found two Low songs, one of them "Shame" and the other, "Sunflowers." I need to do a longer post on the latter, but here is "Shame," and yes, fuck you, I was (am?) of those people best described as anhedonics [sic]

Posted by spaceman at 5:53 PM No comments: 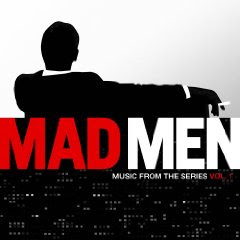 There have been many versions of this song, most notably by Don McLean, the 1970s singer dude. Here is one version, featured in an episode of Mad Men, a TV show shown here in the U.S. on AMC for the past couple of years. David Carbonara scores the music for the show.

Below, a short scene from Satyajit Ray's Charulata (1964).

The song is, of course, "Phule Phule Dhole Dhole" written by Rabindranath Tagore, who adapted the melody from "Ye Banks and Braes o' Bonnie Doon" by the 18th century Scottish bard Robert Burns. The change to a minor chord gives the melody a deeply yearning quality (as opposed to the more maudlin nature of a lot of his other work).

Below also, an mp3 from a contemporary Bengali singer, Sahana (shown below), who recorded this version in 2007 for her album Notun Korey Paabo Boley. More about her here. 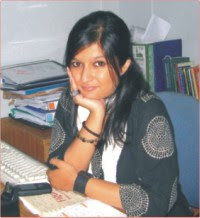 Posted by spaceman at 9:50 AM No comments:

reminds me of my lost years, noho '95 in particular. i miss those days... living in the moment, place to place, month to month, song to song

Posted by spaceman at 2:45 PM No comments:

Haunted When The Minutes Drag 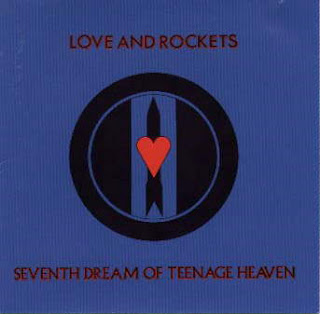 The music of the late eighties remains an important touchstone for me, mostly because I was just at the right age to soak it up, i.e., young. I was enamored of British pop music of the period but at the same time deeply identified with a completely different strand of American pop music. The former was seemingly intellectual, the performers harboring aspirations of "high art." British pop stars seem to think that they were doing something enduring, something transcending the genre of disposable pop music. Most of the American music I liked, on the other hand, was much more self-consciously low-brow. This was the apex of American indie rock, converse shoes, and stupid but awesome songs by Camper Van Beethoven.

So, recently, somebody gave me a subscription to Rhapsody.com and I thought I'd revisit the late eighties, which rock critics commonly see as a fallow period. It's seen either as the period when a lot of synthetic pop shit dominated MTV (remember them?) or simply as presage to the revolution to be ushered in by Seattle. I remember neither. For me, the revolution had already happened in my head. Music was incredibly exciting, thrilling even, between 1986 and 1990. I'm not sure that if I heard the same music today I would find it exciting at all, but that is part of what makes youth so peculiar. Youth magnifies the resonant moments, the moments when you think that a piece of art (book, music, movie) deeply moves you into believing (some would say, tricks you into believing) that that piece of art is something essential in your life. You get older and these identifications seem, not so much trivial, but unattainable. After the age of thirty, how could a mere song (a song, imagine that!) mean anything more than a pleasant diversion for three or four minutes?

So I'm listening to a playlist of commercial pop music of the late eighties, the music of my youth, but I decided to go with the British spectrum of my tastes, exemplified perfectly by "Haunted When the Minutes Drag," the 6+ minutes epic by the band Love and Rockets, released originally in 1985 on an album with the particularly unwieldy title Seventh Dream of Teenage Heaven. As uncool as it was to like them, I always loved Love and Rockets. Every one of their albums had some tasty morsel, something fun about it. And indelibly (and unapologetically) British. Most laypeople remember Love & Rockets for their only Top 10 hit "So Alive" but their albums were all surprisingly fun to listen to, full of wry psychedelic touches, Syd Barrett-isms, and forward-looking atmospherics. They even had a couple of great techno albums (Hot Trip to Heaven and Lift), but really, their archetypical touchstone was the first album, Seventh Dream, and in particular, this epic track, worthy of many youthful indiscretions.

Posted by spaceman at 9:52 AM No comments:

The Moon Is Down 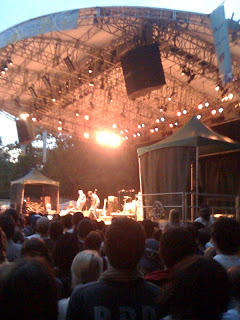 This music is so fucking beautiful, I can hardly breathe. There is a moment at 5 minutes and 45 seconds into "The Moon Is Down" when the whole world collapses around me. This, their magnum opus, they did not play last night at Summerstage in Central Park. It rained and rained like the flood. Our feet, socks, shoes, ankles were wet. The sky was like a wet hood over our heads. Walking from the entrance at 72nd St. into Central Park, we walked through puddles, ran through pathways, soaked in the wetness of a June dusk. The band were animated, celebrating their tenth year together, four dudes from Texas. We stood around until we were too tired to stand.

None of their songs have words, each piece is roughly ten minutes long. There are only two electric guitars, a bass guitar, and a drum set. The music they produce is indescribably beautiful, passing through ebbs, flows, silence, pauses, crescendos, climaxes, and wordless guitar interplays that make (and made) my heart drop into the deep pit of my stomach. There are no chords in any of their music, only notes, clear pristine notes without a hint of tremelo, but with lots of echo. The notes circle around each other, going up, going down, sometimes just going around each other in a way that is absolutely obvious but you've never really heard before. The sounds of the silences come at you between the notes, the melodies breathtakingly beautiful and...also obvious but unheard.

They did not play very long, perhaps one hour or so but performed about six long pieces ending with "Memorial," another track off their new album. Unlike the other pieces, this wasn't drop dead melancholy but rather ponderous (in a go 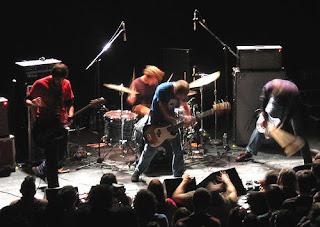 od way) and in a way that may make you think of the word "behold." Behold what, I do not know. Just Behold. The song ended in a massed crescendo which was so fucking loud, that it made me feel the Earth, my heart, my lips, my blood, and the vibrating air in the spaces between my toes, so loud that the boys on stage were maniacally and unselfconsciously pummeling their instruments which such wanton abandon that at one point two of them--the two guys with the lead guitars--tripped over themselves and landed on their asses, still pummeling their guitars into outer space drone-noise ecstacy.

Explosions in the Sky are from Midland, Texas, apparently the hometown of the country's current President.

And another review I wrote after seeing them in 2005:

The one thing that struck me seeing them this second time was that it demands something of the audience in that you have to leave your expectations of a "normal" rock show behind. There are no typical musical cues (choruses, verses, climaxes, themes) that punctuate your time in neat segments. If you pay too much attention to the detail of the music (that guitar figure, this drum break) you lose sense of the beauty of the music. In one sense to truly appreciate their music, you have to abandon the rules of musical showmanship behind. Which I suppose is why some call them post-rock (although I hate that tag in general)... If you have ever felt sad in your life, even if for a short while... so sad that it dropped the heaviness in your chest deep into the pit of your stomach, you will probably be able to relate to this music. It is music deeply embedded in the essence of what makes us sad, and in knowing that what makes us utterly sad is often the exact same feeling that makes us exult and euphoric....

At the show, as far as I could tell, they ... omitted "Your Hand In Mine," the most obviously melancholy piece of their oeuvre, a move that in some sense was a relief to me; I could walk out at the end of the night without having felt the emotions too deeply in the pit of my stomach... What I remembered were the three guitarists at the front of the stage pouncing/pounding their instruments in unison at the end of "Memorial" in a way that suggested some unearthly dance of arms, some violence so fucking loud that I left the hallroom with a high pitch in my ears. How can music so sad be so loud that it'll rip your ears out?

So today's featured track is "The Moon Is Down," probably their most illegally sad piece, ten minutes of drowning in sound, from utter silence to manic frenzy. Turn off the lights when it's dusk and listen to the way the world falls away at exactly 5 minutes and 45 seconds into the piece.

On the way home, the rain had completely stopped. Central Park was a husk, just shadows and bright lights. A taxi, dirty feet, the couch, tired as hell, far from the war that Steinbeck once described in The Moon Is Down.