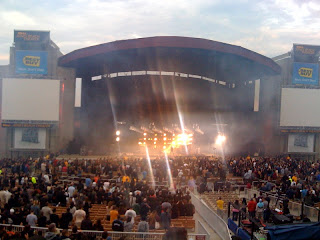 So....about 18 years ago, 1991, on a really hot August Friday, I managed to find myself surrounded by what in those days, the kids used to call "alternative" music. Sounds so quaint these days. Anyway, there, somewhere in the outskirts of Dallas, TX, a bunch of us freaks were at a Lollapalooza show to witness the music of an assortment of bands: Siouxsie & the Banshees, the Butthole Surfers, the Rollins Band, Ice-T, etc. Yet, most of were really there to see two acts: Jane's Addiction and Nine Inch Nails, bands at the cusp of very different things. The former had somehow ascended to the top of the heap of the genre, having just released the unfuckingbelievable Ritual de lo Habitual the previous year. Unbeknownst to us, they were just about to break up. The latter, Nine Inch Nails, had just released their debut album, Pretty Hate Machine, which we had slotted in along with much of the other "industrial" music around at the time, bands like Ministry, A Split Second, Skinny Puppy, Front 242, etc. Unbeknownst to us, Nine Inch Nails, led by some skinny dude from Ohio named Trent Reznor, was about to launch into some global stratospheric level of fame.

Fast forward 18 (!) years, and lo and behold, I managed to revisit both bands, just last week at Wantagh, New York, way out the fuck somewhere in Long Island. The two are on a joint tour, cleverly named NINJA (get it?). Jane's has only the most tenuous of justifications for the tour. They broke up in '91 but have been sporadically reuniting with a number of rotating bassists, since their original bassist dude had refused to be in the same room with the others. A few years ago, with a new bassist, they released a fairly lackluster album (Strays) but we have heard nothing new from them since then. Said bass guitarist finally caved in last year and decided to join Jane's for a new tour, and hence they are on tour ("the original band!") peddling songs from their three original releases (Jane's Addiction, Nothing's Shocking, and Ritual de lo Habitual).

NIN, meanwhile, has been an ongoing enterprise, a veritable mega-corporate machine that has been running like a slick well-oiled machine for nearly two decades catering to the needs of America's disaffected suburban youth. After the stratospheric success of The Downward Spiral in the early nineties, Trent has continued releasing albums every so often. More recently, he's put out a flood of new music (Year Zero, Ghosts I-IV, The Slip) that suggests that he's in some sort of creative renaissance after what seemed like a cul-de-sac. So...Jane's is basically an oldies act while NIN is still a vibrant quantity. Never woulda guessed that in '91, huh?

How was the show? Well, I can't speak for crazy obsessed NIN fans, but I confess I was blown away by the NIN show. Their set was immaculately executed, the sound was crystal clear, and the energy level was high. Last year, NIN toured with a very elaborate stage show on their Lights in the Sky tour which, I am told was "fucking awesome" (Thank you E). This time, the stage show was fairly stripped down, putting more focus on the performers themselves. Trent has buffed up several orders since he was a skinny kid from Ohio fucking with keyboards and drum machines. He looks a little scary, frankly. On occasions in his career, Trent has skirted bathos with his insistence that he is ANGRY, always ANGRY. Yet, on stage, his performance seems less contrived than machine-like (and yes, there is a difference). His vocal affectations never seemed pulled back; on the contrary, he seemed to be projecting himself completely into his lyrics, his songs, his music, and his audience, never for one second letting up. I appreciated that.

The set was heavy with tracks from the early years, particularly, The Downward Spiral, whose songs came alive well on stage often in forms noticeably different from the album versions but not enough that it rendered them unrecognizable. If the songs from The Downward Spiral were there to please the casual fans, Trent was good enough to include a slew of lesser known songs from The Fragile, the double-CD album which many call too sprawling and without focus but which, I think, has aged much better than much of his other stuff, given that it communicates an emotional and sonic depth lacking in his other work. There were also a few stray (and fantastic) tracks from later releases, including "The Hand That Feeds" from With Teeth, and a couple from Year Zero ("Survivalism") and The Slip ("Echoplex"), two recent releases that show Reznor noticeably moving away from his usual "I" centered narratives to a more externalized view of the world. Year Zero was a surprisingly successful experiment at creating a post-everything dystopic world out of music (not a new idea, but well executed) while The Slip was a stripped down album of great succinct songs, his first non-concept album since the debut. There was nothing from Ghosts I-IV, a superb collection of instrumental tracks also released recently but such ambient music (à la Aphex Twin) would have undercut the momentum/inertia of the show.

Two covers underscored how Reznor is basically the mutant child of older sonic pioneers: "I'm Afraid of Americans" by David Bowie and "Metal" by Gary Numan. The show ended with an encore that combined one of his oldest and best songs, "Head Like a Hole" with "Hurt," the beautiful (yeah, beautiful) coda from The Downward Spiral. "Hurt" is a peculiar song in the NIN canon in that it combines a mournful acoustic guitar melody with a lyric that is genuinely sad (as opposed to angry or depressed). In perhaps the two most simple yet "gives-you-chills" lines the NIN catalog, Trent sings about the perils of self-destruction, about the trail of wreckage left behind:

You are someone else
I am still right here.

In concert, it's a strange moment, like the air being sucked out of you -- even though I've heard it a thousand times. At Wantaugh, you felt the chilly air of southern Long Island, the beautiful bay, a backdrop to the amphitheater. I felt a pang of what, I don't know. I knew I didn't want to lose what I had right there next to me. I wanted to hold on.

I won't let you fall apart

Jane's came on a little bit later. Their sound mix was vastly inferior to the NIN show, since some klutz had obviously turned up the bass sound to, like, Spinal Tap levels, way beyond distortion. I have a special fondness for the band. I kinda grew up on their two studio albums, and I still think the music on those albums are unassailable, a perfect mix of punk, metal, funk, glam, and God knows what else. They were blessed with fantastic musicians, a guitarist (Dave Navarro) who knew when to pull back, a drummer (Stephen Perkins) who had a particularly crazy tribal quality, and a bassist (Eric Avery) who was the real backbone of the band, creating entire songs out of some of the best motherfucking bass riffs this side of Jaco Pastorius. They also had a crazy asshole creative genius singer (Perry Farrel) who, while barely competent on an instrument, wrote some awesome space-age lyrics, half of which made no sense but kicked ass.

Two decades after their heyday, Jane's looked more or less in good shape. Navarro looks like he's been preserved in Madame Tussauds or something while Perry looks about as skinny as ever but a little tanned and more withered. They began with probably their very best song, "Three Days," a nearly 11 minute tour de force, that according to Wikipedia is a meditation on "death and rebirth." Um, yeah, whatever. From what I can tell, it's about a fucked up menage à trois, which is, well, fine, but fortunately, the song rocks. Here is a version from late 1990. Fucking rocks.

From that, they basically ran through much of their (very) small catalog. Being essentially an oldies act means that they don't have to play their new album, but they did dig deep here and there, uncovering a couple of choice obscurities, including "Then She Did," a song, apparently about Perry's mother's suicide which encapsulates many of the best things about Jane's original run in the late eighties: mystery, storytelling narrative, and da rock and roll. You get a sense of Perry's songwriting chops when the song begins with the simple words:

Now her paints are dry...

I love how a few choice words can set the entire stage for a scene. You get the whole scene immediately. Singing to one of his lovers, Perry finishes the song thus:

They also did their chilling account of Ted Bundy's killing spree, "Ted, Just Admit It" although, unlike the last time, they did not have videos of Bundy on the backscreen. The show ended with a spirited "Jane Says," the song that most people associate with Jane's, the best singalong song about heroin addiction and prostitution ever written.

On the drive home, I felt close.