I have a terrible headache, a bad cold, you know, the usual. It is a Friday night and I'm considering what to do. Not that there are that many options. I mean, there are basically two options, stay in or go out. The 'out' option is not terribly exciting and involves meeting up with a person, probably downtown somewhere even though I want to stay uptown. And conversation will inevitably be stilted. And let's face it, I don't really want to go out, I mean what's the point? I will spend money pointlessly, forget about the obvious shittiness of my life for a coupla hours, and then feel bad physically (and otherwise) tomorrow. And I don't want to stay in because I don't like 'in.' Long story.

I got an e-mail from an old friend of mine in Bangladesh yesterday who wrote to me to remind me of the songs we used to listen to as kids. Apparently, I had a cassette tape (!) which had a song by the band called Poco. Yes, Poco, that Poco. Think of 1970s-era sub-Eagles feel-good California music that flows over you. As soon as the song is over, you've forgotten it, but it felt good to listen to it for a few minutes, especially 'cause when you first heard it you were 15 years old and had a crush on some girl. The song in question, "Crazy Love," is actually not as bad as I make it sound. It still conjures up little feelings buried somewhere in my keenly sharped indie brain. "Crazy Love" was perfect for being 15 and being, um, of the sensitive ilk.

Anyway, the dude who wrote me the e-mail is exactly my age, has the same name. We followed very identical paths in our adolescence, smoking our first cigarettes together, having our first girlfriends, discovering Houses of the Holy at the same time, reading Slaughterhouse Five simultaneously, etc. etc. One might say that he was my best friend at that time. We were two clowns, he the witty optimistic and me the sardonic foil. (Although when we argued, it was always because I accused him of using my jokes, which were better than his, to impress people and pick up chicks). I have not had much contact with him since we were about 18 although I've seen him on and off over the years, sometimes at parties, once in a bar in the West Village, another time at the international airport in Calcutta (Kolkata). He remains perfectly frozen in time, maybe not physically but his personality and his presence. He's just as full of optimistic one-liners and has nary a dark strand in his entire body. He has no time for melancholia or navel-gazing or yearning or any such thing. Life is good and it is what it is. In his free time, he seems to follow English soccer and posts youtube videos of forgotten seventies bands on his Facebook page. ("California" by Manfred Mann, anyone?).

I have my headphones on, listening to stuff on random. Am listening to an old Verve song, the one called "So It Goes." He ends the song with the obvious lines.

I can't get over how awesome this song is. From their recent album It's Blitz. 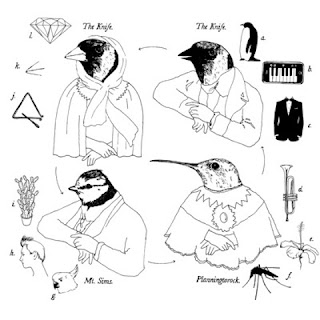 In my haste to do a top 75 list of the '00s, I forgot a lot of really awesome albums, including, of course, Silent Shout (2006) by The Knife, those folks from Sweden--actually two people--who make the weirdest most interesting electronic music this side of Burial. They have this whole shtick in which they never appear in public and don't give interviews. I don't really know how to describe their music but lazy reviewers always say "electro pop." Whatever. One of the people in The Knife lists her influences as:

Anyway, recently, they decided to write an opera for the Danish performance group Hotel Pro Forma. The opera, entitled Tomorrow, In A Year, is based on Charles Darwin's On the Origin of Species. They recently released the first product of this work, an 11-minute track called "Colouring of Pigeons" which is a collaboration with Mt. Sims and Planningtorock.

I Was Buying Some Feelings

Yes, Nick McCabe was awesome. This is from 1997

Posted by spaceman at 4:24 PM No comments: 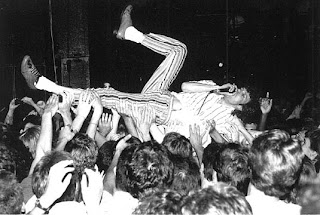 Not to continuously go on about Paul W., but I just noticed that he turned 50 yesterday. Fifty! Wow. There's a very nice understated article in the Minneapolis Star-Tribune here.

I was thinking today about what music has meant the most to me in my whole life, and I would have to narrow it down to two, perhaps three bands. I don't listen to any of them that much anymore, but I doubt that any other music will ever have that kind of an effect on my life again. There's something about absorbing music (or movies or literature or whatever) in your twenties that cannot be repeated. And so, with the Smiths, the Replacements, and possibly, with Nirvana, I experienced something deeply traumatic. Not, life-changing but certainly life-reflecting. I was obsessed with each of these bands, enough to track down EVERY SINGLE SONG they had ever released or indeed, recorded. (Ever heard the extremely rare and brilliant live version of "Some Girls are Bigger Than Others" that was released on the b-side of the 12" of "I Started Something I Couldn't Finish" in 1987? Thought So. Yes, I have it somewhere). But that's just the technical part. I was also so obsessed with these bands that I could hardly go a day by without listening to them or thinking about what they were singing about.

Now it is more than twenty years later. I discovered the Smiths and Replacements in '86. I found Nirvana in '91. That's over two decades ago. I'm much much older, not even like a cool older uncle, but just a hasbeen old guy who hasn't taken good care of himself in the past coupla decades, and just complains about his back and mumbles under his breath about how "the kids these days, they just don't get it, do they?"

Now, I'm not sure if Paul is like that these days, but he sure doesn't seem to give a shit about anything, and when he does emerge from his dark dank basement, he sounds like a curmudgeon. He's married, lives in a suburb of a big midwestern city, barely goes out or listens to anything in the outside world, probably watches sports, goes to see his son play baseball, maybe complains to his wife about having to take so many Goddamn anti-depressants every day. He could give two shits about Radiohead, probably still listens to albums by Sonny and Cher, and rarely smiles. He remembers very little of the Replacements, and why should he remember any of it?

You were always kinda young to me, but like an older brother who was about 25 or something. But still young. Without blemishes. Now you're 50. Ain't so young anymore. Just like me.

Here's a song you wrote a long time ago, never bothered to release, until your record company forced you to about 20 years later. It is called "Birthday Gal." It is as sad as all the girls who wanted to sleep you and the boys who wanted to be you.

"Wax is dripping from the frosting on the cake
Come on, girl, buckle up, and don't hesitate
Take a deep breath and blow 'em all away
...
Birthday gal, do you wish that
There weren't quite as many candles that you had to blow away?"

The Replacements -- Birthday Gal [demo]
Posted by spaceman at 10:36 PM No comments: