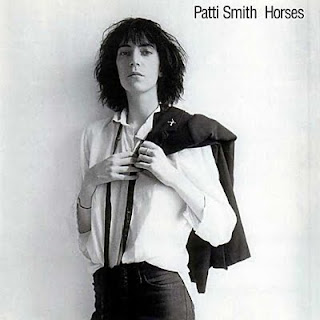 I first heard Horses in the early winter of '89, probably January. Needless to say it blew my fucking mind. I don't think there has been an album since or before that so profoundly fucked with my sense of what was "possible" in music. I didn't want to fuck Patti Smith, I wanted to be her. I remember playing "Gloria" for my friends, almost proud that I had stumbled upon a piece of musical archeology. I remember the rush, the unbelievable chill I got hearing those first words on the album: "Jesus died for somebody's sins but not mine." There were a lot of songs about fucking on that album but that's not why I loved the music. Horses was fundamentally about a challenge. It challenges you to see beyond, to look outside, to break through, to delve deeper. And yes, perhaps it works best when you are 20 years old and not when you're 30. But in that way, I was lucky to have stumbled upon her genius at that age. (Smith herself was 29 when she recorded the album.)

The picture of her on the cover of Horses -- well, what's the point of even trying to describe it in words? It may be the best album cover of all time. Robert Mapplethorpe, he of the tragic end to life, captured the weird androgyny of Patti Smith that is at the heart of the best rock'n'roll. (Aside: Mapplethorpe was also the photographer for Television's Marquee Moon, another inscrutably brilliant album cover).

Instead of offering something off of Horses, today I offer the b-side of Smith's first single from June 1974, "Piss Factory," supposedly the first punk rock song ever released. She didn't include the song on Horses, but it's worth a listen for the boundaries she was already pushing before the album. When I was a TA for the "history of rock'n'roll" class at Carnegie Mellon in the spring of 2001, I played all of "Piss Factory" to my class (100+ students!) because I wanted them to know the possibilities inherent in the medium of pop music. I also handed out lyrics to her song, "Rock'n'Roll Nigger." In an interview from the spring of 1976, just after Horses was released, Smith noted:

Every time I say the word pussy at a poetry reading, some idiot broad rises and has a fit. “What’s your definition of pussy, sister?” I dunno, it’s a slang term. If I wanna say pussy, I’ll say pussy. If I wanna say nigger, I’ll say nigger. If somebody wants to call me a cracker bitch, that’s cool. It’s all part of being American. But all these tight-assed movements are fucking up our slang, and that eats it. 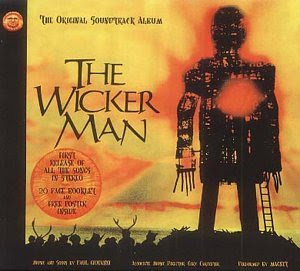 I was at this show (below, in the video, on May 19, 2008) at Radio City Hall here in New York, just after the semester had ended, to watch the band Swell Season. The year before, we had seen the movie Once which I really enjoyed -- it was a touching fictional story about a street-singing singer/busker in Dublin who falls for a sweet Czech girl. The two characters were played by the two main singers of Swell Season who also wrote all the songs.

So.. about half way through the show at Radio City Hall, Markéta Irglová (the Czech girl, just 20 years old), did a solo number, inviting her sister (Zuzana) to sing. They did a particularly haunting version of "Gently Johnny," a song originally featured on The Wicker Man soundtrack. Wicker Man was a rather obscure British horror movie put out in 1973 which featured a few British luminaries of the time including Britt Ekland and Christopher Lee. In recent years, there's been a general reassessment of the movie, and many critics now consider it a horror classic. I was totally blown over by the song and immediately got the soundtrack (which is middling at best).

Below I have Swell Season's beautiful version, followed by an mp3 of the original by Paul Giovanni who composed the soundtrack for The Wicker Man. Giovanni's version is much more in the form of an olde English folk parable, probably the way it was originally meant to be. Irglová's version is like a spooky Joni Mitchell song. Both are awesome. (And no, I'm not going to mention the horrible 2006 remake of The Wicker Man.)