A short post, prompted by having just stumbled upon a video of one of the best dance songs of all time, Donna Summer's 1977 classic "I Feel Love." Apparently originally released as a b-side, it, of course, became a massive hit. Amazing, really, how futuristic and forward-thinking the song was, for which most of the credit should go to producer Giorgio Moroder. The video is not all that great in terms of quality, but it's definitely worth a see.

I should add that Giorgio Moroder himself released a few albums, one of which, From Here to Eternity (also from 1977) was something I listened to quite a lot when I was in my early teens (thanks to a friend of mine, Sameena, who, God knows where she is these days, was a big fan). It's definitely worth checking out. The kids these days say that From Here to Eternity was where trance and house music began, which seems a little overstated. Looking up the album on the dreaded wikipedia, it turns out that in the production credits of the album, Moroder wrote: "Only electronic keyboards were used in the making of the album." I think that's fantastic!... Because it completely inverts the kind of self-important claims for "authenticity" that rock musicians would aspire to in the 1980s, about how everything on their albums was played on guitars....you know....no Goddamn synthesizers...but REAL instruments. Giorgio, it turns out, was way ahead of pack in many respects, not just in terms of his music but also in terms of an understanding of what he was doing.

Posted by spaceman at 4:28 PM No comments:

I'm no good with regular posts partly (well, mostly) (well, completely) because I have so much other shit to do in life. I have no time to write here. Which means that what I do is mostly daydream about my clever, erudite, and oh so witty musings that I will one day post on this blog that people will be impressed with.

I have a long post, which I intend to finish soon, on the state of pop music in Bangladesh. But until then, I thought I'd post on some contemporary news. Pitchfork recently reported that the band Godspeed You! Black Emperor may have broken up. I know in the real world, a band possibly breaking up is not big news, but it is big news when the band in question is Godspeed. I would guess that if I had to name my favorite musical act from the past ten years, Godspeed would be a contender for the top spot.

Rock critics like to call Godspeed "post-rock" but such a reductive (and silly) term does them no justice. Nay, Godspeed's music is the music God might make had God been a bunch of hairy anarchists from Canada. So...Godspeed are a band based on Montreal, more of a collective than a band, a band that resolutely rejects the notion of leaders, individuals, entertainment personalities, and the often absurd travails of modern day musical (conspicuous) consumption. They are anarchists (!) who put their money where their mouth(s) are. The band gives almost no interviews, claims it has no 'leaders,' self-releases their own records, never signed with a major label, organizes their tours themselves, etc. etc. They are political. Not political in the U2 sense of the word--preachy, contrived, and self-righteous--but political in the most personal levels possible. Their music has no lyrics, although frequently, the music is interspersed with spoken word samples that hint at a kind of personal dissafectation with modern day capitalism. But all of this, on some level, is irrelevant.

The main thing is the music. The music combines absurd beauty with galactic-levels of sadness. As a working orchestra (of usually nine or so people), they play ensemble music, each "song" lasting between 15 and 25 minutes. Each track is divided into movements, much like classical music. The instruments are basically guitar, bass, drum, violins, french horns, electronics, vocals, etc. With these instruments, they produce a music that can be as silent as paper clips dropping on the floor-- or raging jet engines in your face....suffused with a sheer and utter melancholia that is both helpless and hopeful at the same time. 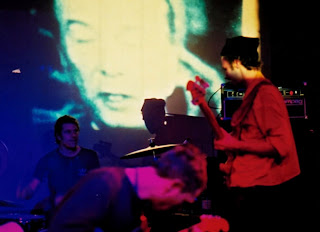 Once, while listening to a Godspeed track, all that was going through my mind was the following imaginary title, perhaps thought of by a vagabond on a street: "The Incredibly Small Dot That I Am At The Very Bottom of the Giant Fucking Ocean That We Call Pacific Thousands of Miles From Anywhere in a Bottomless Expanse of Infinite Sadness That Cannot Be Described in Words But Is Lived Constantly In My Daily Life."

Their music traffics in the same kind of dynamics of melancholia purveyed by three other favorite bands of mine: Mogwai, Sigur Ros, and Explosions in the Sky. But unlike these three, Godspeed sounds ragged, almost improvised, and undeniably serious. And fucking glorious. And where all three of these other bands have their moments of brilliance and stomach-churning melancholia, Godspeed makes you viscerally disconnect from people around you. You might never want to feel like that, which is fine. Godspeed's music is not for everyone. It is an acquired taste. It is a soundtrack for the moments that make us uncomfortable with our lives. It is the music of discomfort, of strangeness, of incoherence and yes, even of coherence. It is a music of contradictions. I think the closest classical comparison would be Henryk Gorecki, whose Symphony No. 3 probably can conjure the same emotions in even the coldest and most alienated human being. (More on that in another entry).

Godspeed You! Black Emperor (they used to be Godspeed You Black Emperor!) has released one e.p. and three full length albums. Their second album, Lift Your Skinny Fists Like Antennas to Heaven, is a brilliant double album, one of my favorite albums of the past one million years. Released in 2000, it has four long pieces ("Storm," "Static," "Sleep," and "Antennas to Heaven") that will bring you to your knees. 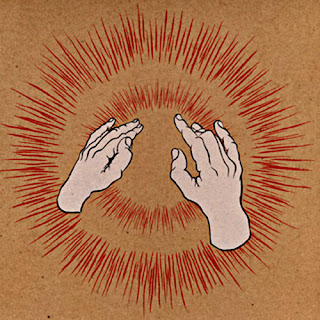 I guarantee it. "Sleep" especially is Godawfully beautiful, beginning with a wonderful monologue by an older gentleman, someone who is remembering, haltingly remembering, his time as a young man on Coney Island, about the times when they slept on the beach as young men. Now they no longer sleep on the beach anymore. It's never explained why. But a mournful music begins that takes you on three different movements for about 23 minutes before moving into "Antennas to Heaven," which itself is nearly 19 minutes long. Not at all dirgelike.

I saw Godspeed in April 2003 at Warsaw (the Polish National Home) in Brooklyn. They were touring in support of their final album Yanqui U.X.O. which, although not as good as its predecessor, contained "Motherfucker=Redeemer" (in two parts), the first part of which is a roller coaster of riffs, notes, crescendos that left me breathless as I watched it in concert. Beginning with the soft notes of a xylophone, the music lifted the crowd off the ground, made us take deep deep breaths, made us gasp for air as it headed to its strange conclusion of echoes and guitars ringing through the hall. One of their best pieces of music.

I'm glad I saw them since it looks they won't ever be touring again. It was such a beautiful show. I was mesmerized, almost brought the point of tears. Their shows were not just musical affairs, but also fully realized visual extravaganzas, with movies projected on the band and on to the background, vaguely political moving images from history. Their political message can be seen on one level as hopeless and cynical -- after all according to Godspeed the world is fucked. Profoundly fucked. So it was comforting, almost revelatory to see the band end their show with words of hope ("Hope") flashed on the background, as they convened one last time to play a lovely lullabye piece (called "Outro") that was almost playful, fun, and happy (yes, happy) in its tone. The band smiled throughout this last piece, enjoying each other's company, ended the beautiful piece, stood up, clapped, waved, and were gone.

While Godspeed You! Black Emperor may not exist anymore, several of its band members have gone on to other bands, notably Thee Silver Mt. Zion Memorial Orchestra and Tra-La-La Band who are still around (in fact, they have a new album coming out soon). There's a very evocative review of a Silver Mt. Zion album (Horses in the Sky) which briefly mentions their earlier classic album He Has Left Us Alone But Shafts Of Light Sometimes Grace The Corner of Our Rooms... It's worth a read.

Here's an amateur video of "Albanian" by Godspeed, an unreleased track that they played live on their 2003 tour.

And here's another one from the same tour of them doing a portion of the first song ("Storm") off of Lift Your Skinny Fists. Neither of the videos do remote justice to their music or their live showa but they do provide a sense of the ensemble nature of their work.

Finally, although "Outro" (the almost "happy" track that they ended their shows with) was never released on an official Godspeed album, it is featured in a compilation CD released by Constellation records entitled Song of the Silent Land. The CD is worth getting. In case you're interested, I've posted an mp3 of "Outro" here. A little bit of an acquired taste, but still very cool.

Godspeed You! Black Emperor - Outro [mp3]
Posted by spaceman at 8:58 PM No comments: