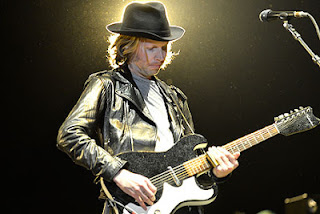 I'm sure I've posted this before, but whatever. Apparently Beck is gonna put out an album soon, after what seems like four... five....six years? Still, the Sea Change album is the one I keep coming back to. A bit melancholy, for sure, but it was a shock to see him being earnest and produce a good batch of songs. I'm posting two songs from the album ("Guess I'm Doing Fine" and "Lost Cause") as well as a third ("Looking For A Sign"), which may have been recorded at the time, but released just this year on the soundtrack of the movie Jeff Who Lives At Home. (Good movie, by the way).


What is Beck up to these days? Producing other people's albums (Dwight Yoakam, Thurston Moore, etc.), putting out sheet music, and apparently trying to finish an album he started five years ago. Oh, he also played live a few times, including at Sasquatch (playing slide guitar there, above).