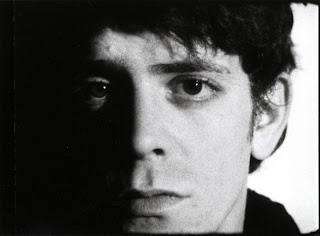 Well, I had this idea I would write about how much Lou Reed's music and lyrics affected me, or how I discovered the Velvet Underground (sophomore year, college), or how White Light/White Heat totally blew my fucking mind when I heard it, how the band's four-album run of brilliance from 1967, 1968, 1969, and 1970 are unparalleled in the history of pop music, or how I once saw Lou Reed at a movie theater in Chelsea watching a science fiction movie, or how a song like "Sunday Morning" can still make me cry ... but honestly .... doing so would just be kind of inane, and pale against the enormity of Lou Reed no longer being among the living.

I do know this though: if I had to name the 10 most innovative and revolutionary artists of 20th century Western culture (not pop culture, ALL culture), Lou Reed would be on that list. It might include Stanley Kubrick, Andy Warhol, the Beatles, Jackson Pollock, James Joyce, William S. Burroughs, Kurt Vonnegut, some others. Maybe Woody Allen. But not Martin Scorcese (or for that matter, Quentin Tarantino), both of whom are too fascinated with the boring past to have done anything that looks forward to the future. But there was one thing that was true about Lou Reed: he was always facing the future.

Interesting that both Woody Allen and Lou Reed were New Yorkers, both Jewish, and both dedicated their art to New York. Yet they couldn't be from more different worlds. And where Woody Allen could be brilliantly innovative, especially with the medium of film, he very much restricted himself to the possibilities entertained by polite white liberal culture. In other words, you will never find someone in a Woody Allen movie who is a male prostitute named Sister Ray who is into S/M, scoring heroin, picking up a john, and complaining that they were too busy "sucking on my ding dong." All of that and more in a single Reed song, "Sister Ray," which the band were performing by 1967, while the rest of the hippie world were talking about flowers, peace, and love. (I take a lot of pleasure in knowing that late 1960s hippie counterculture people hated the Velvets for being too "negative.")

Besides being a bit depraved in his lyrical sensibilities, Lou Reed could also write beautiful songs which were always melodically elegant and simple. His songs had 2, maybe 3 chords. You always got the feeling that you'd heard the song before, but in fact, his songs were completely original. And the prose wonderful. Consider this:

Candy says
"I've come to hate my body
And all that it requires
In this world."

Sure, Lou Reed was probably a bit of a dick in person. But he got a free lifetime pass for writing some of the most beautiful music ever made about and for fucked up people.