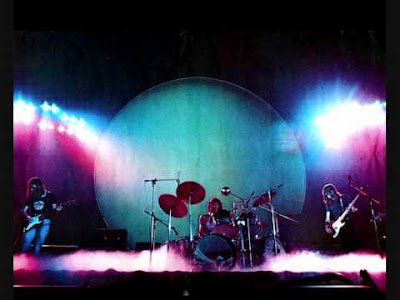 Been listening to a lot of middle-period Pink Floyd recently, stuff from 1970 to about 1975. There's nothing particularly uniform about this period but I appreciate their ability to fuse pop with some moderate experimentation. There are two very high-quality BBC sessions from 1970 and 1971 that are circulating (use The Googles and ye shall find). Both sessions find the band firmly in their first post-Syd incarnation--no weird loopy psychedelic pop songs--but rather a bit of pastoral hippie music with bits and pieces of musique concrete. Most of the material is from Atom Heart Mother (1970) and Meddle (1971). Here is "Fat Old Sun," a rare David Gilmour tune that they dress up with loud electric guitars and rustic organs:

Have also dipped my toes into the live world of Floyd, particular their spectacular late 1974 tour of Great Britain. Here, they performed a superb setlist, including three completely new (at the time) songs, opening with the gorgeous "Shine On You Crazy Diamond" and following up with the vitriolic, bilious, and brilliant pair of "Raving and Drooling" and "You've Got To Be Crazy." There's something quite attractive about musical acts introducing lots of new unrecorded songs on tours. You would hardly find that these days.

The latter two songs would, of course, many years later, show up on the Animals (1977) album under entirely different titles. These three epic (and I really mean, EPIC) songs were then followed by a complete performance of the soon-to-be classic rock warhorse of Dark Side of the Moon, which for all its faults and its over-familiarity and identification with the most reactionary dad-rock, still sounds remarkably beautiful in 1974, performed by a four-piece. Finally, the show concludes with a lengthy "Echoes" where the band gets a bit of their rock out. Awful lyrics (hello Roger Waters?) but you can't fault the tremendous musical execution.

From that 1974 tour, here is "Any Colour You Like"--actually from their Wembley performance on November 16, 1974. Gentle psychedelia for the cognitively-impaired and sleep-deprived hippie in me. Every bandmember is amazing here but of particular note is the bass playing by Roger Waters, someone not normally known as a musician of any note, but here he really takes the axe by the hand and more than acquits himself on the instrument in sometimes busy and sometimes extremely understated ways, often alternating between beautiful bass runs up and down the fret boards to soft harmonics and suspended notes (hear the parts, especially, from about 3 minutes in....) Fantastic stuff....

I should add that things seem woefully not right now and there is no hope that they will get better. In fact, there's a good chance that things will be... very difficult, for the near term. Family, relationship, and work, the triad that holds things up -- none of these things are in a healthy state now. And doesn't the world seem a dismal place? Tragedy, death, violence, prejudice, conflict, etc. -- you wonder what happened.

In that spirit, let me offer one more Floyd tune from that era, one that reminds us that a small piece of music can be, in the right circumstances, a salve for the soul. Here is a beautiful demo by the absolutely underrated Richard Wright. This is a demo of the chords that later made up the song "Us And Them" from Dark Side. Listening to it, I am reminded that it is possible to forget things for a while and imagine a better time. Music has this paradoxical capability to let you sink completely within yourself and yet, while at the same time, allowing you to totally forget yourself too.