Music to get (in alphabetical order): 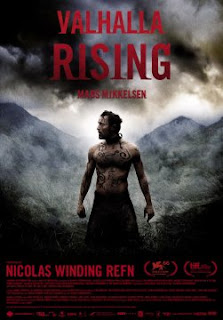 It's 8.12 am. I'm bleary-eyed. I saw the movie Valhalla Rising last night with the unbearably handsome Mads Mikkelsen. The movie was largely impressionistic, about a band of Vikings (actually, Christian Vikings) who go off on a quest to seek the holy land. The timing doesn't really make any sense to me, but whatever. It was grim and violent, with lots of dream sequences, and much gloomy goth guitar music. Mikkelsen gained fame, as a friend pointed out, playing the inimitable and evil Le Chiffre in the recent Bond movie Casino Royale (2006). And yes, Le Chiffre has a wikipedia page devoted to his character. Mikkelsen was playing a role made famous by Peter Lorre and Orson Welles. Big shoes to fill. But he is indeed a very handsome man, although has labored in at least a couple of movies now with a damaged left eye.

Last night had its moments. I've lived in New York for nearly ten years now, and the city still manages to excite me every single day (and night). There are new experiences to be had, new ways to walk to old places, new conversations to be had. The long walk, often from Union Square to Grand Central can be a nice one, depending on the route. Late at night, the street lights illuminate quiet lives, solitary pedestrians, intense lovers, and the tender shadows cast on lovely faces from hats bought at H&M. I want to continue to live here in Manhattan. I'm glad I went out even if perhaps I shouldn't have. You see, I want these things. I want them very bad. I've had trouble putting them in my sight. But I know what I want because these are worthwhile goals. I hope it's not too late...?

Nevertheless I'm feeling sad this morning. It's my early morning melancholia, today exacerbated by some obvious circumstantial issues. I'm tired of feeling sad. Can I not just be fucking happy and cheery? And play with puppies? And make jokes about movies where periodization makes no sense? (9th century? 11th century? WTF get it together, dudes). Can I not have a drawer all for myself and not have to make things so complicated that the drawer disappears from my sight as if in a dream? A dream with a home, littered with the detritus of memories.

out on the weekend

Often I am cryptic in these pronouncements of mine. Some of that is laziness. Some of that is not. But right now, every waking moment is painful. It's hard to describe. "... can't relate to joy, he tries to speak and, can't begin to say."

Posted by spaceman at 8:26 AM No comments: