Today, Wednesday, I am in a state of anguish. Especially tonight. Fucking sucks.

Hence this "song" (because it's not really a song so much as a wail into the void) which has a title which is VERY appropriate "L.A. Blues." Ladies and gentlemen, I present The Stooges from the greatest album of all time, Fun House (1970).

Posted by spaceman at 7:16 AM No comments:

BECAUSE THIS IS EXACTLY HOW I FEEL TODAY.

This is "Acetate," the opening track from METZ II, the second album by the Canadian band METZ. One of my favorite albums of last year.

BECAUSE THIS IS EXACTLY HOW I FEEL TODAY.

This is also exactly how one my college bands used to sound. Except we weren't anywhere this good. But we were noisier.

Posted by spaceman at 5:57 AM No comments: 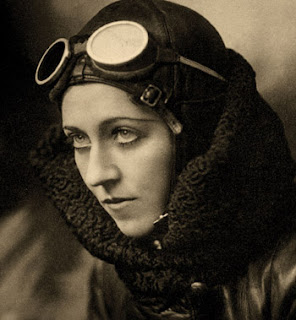 When I was about eight or nine, I was really into airplanes. And one of my most treasured books was a book on the history of aviation, which to a nine-year old seemed utterly romantic and adventurous and exciting. Even the names, all difficult to pronounce, of the pioneers, communicated strangeness, a world inaccessible only in dreams by a little boy. I knew all of these names by heart: Icarus, Otto Lilienthal, Louis Bleriot, Amelia Earhart, Amy Johnson (shown left), Hugo Junkers, Samuel Langley, Alberto Santos-Dumont, Thomas Sopwith, and of course, Charles Lindbergh and the Wright Brothers. And the names of the early biplanes and airplanes were imprinted in my brain. I spent a lot of time drawing sketches of airplanes -- ones from the early 20th century -- flying in the sky. Pages and pages. I was fascinated by flight. Of course, I forgot all that and outgrew it soon after. Not sure what happened. I suppose there was puberty, girls and music and other things.

But so it was a strange surprise to hear this song, "Flying Sorcery" by Al Stewart from his classic album Year of the Cat (1976) which some consider a masterpiece of the mid-seventies singer-songwriter genre. "Flying Sorcery" is a song about those early years of aviation and it so perfectly captures my childhood fascination with flight that I almost feel like someone had talked to me when I was nine and wrote that song down. As the song, floating on a lilting melody, coasts along, we hear about Kitty Hawk (where the Wright Brothers flew), Amy Johnson (who flew from Britain to Australia, above), Tiger Moths, Faith, Hope, and Charity (a British biplane fighter), Leonardo da Vinci, and of course Icarus.

So here is a small part of my childhood, explained in 4 minutes and 23 seconds:

Posted by spaceman at 2:08 PM No comments:

I know I've posted this one before but I love this song by the Yeah Yeah Yeahs, "Skeletons" from their last album It's Blitz! (2010). Not sure what the song is about but it's a really original arrangement for a song, with its faux bagpipes and shuffling drum parts. I have no idea how they reproduce this kind of sound as a 3-piece live. The song overall has a really 1980s pop vibe, something that wouldn't be out of place on MTV in 1985 and yet somehow sounds kind of timeless. The mark of a great pop single.

It's been a while since the band put out a record but if and when they, I'll definitely get it.

Also, I have kind of a big crush on Karen O, who lives in LA.

So back in 1994, I went to see the movie Nadja in a movie theater in Northampton, Massachusetts. Really didn't know what to expect, but I liked it. It had a bit of the style of Hal Hartley and a bit of the style of David Lynch but nothing too weird. It was a nice evocative and atmospheric movie about modern day vampires, starring the quite lovely Elina Lowensohn, an American actress of Romanian origin. But what really stayed with me as I exited the movie was the soundtrack, and in particular one scene in which the main character (Nadja) is talking about emotions, a scene that transitions seamlessly into a dance scene between the two lovers. Here is the moment before that transition, where you can hear the beginnings of a dreamy song:

In the background you hear this music and it seemed positively heavenly. I had no idea what it was. And in those pre-internet days, there was really no way to find out. I don't know exactly how but I began to suspect that the music that I wanted to identify was created by a band called the Verve. Fast-forward a year, to 1995, and I ended up buying the Verve's debut album, A Storm in Heaven. By that time, I had moved to Amherst and was living in the "white house," a lovely and strange house populated by a bunch of transient students but whose bedrock were our landlords Pat and Jacqueline.

It was here that I heard that album a thousand times: A Storm In Heaven completely blew my mind. It wasn't particularly original in any fundamental way: basically shoegazer music with the space-y elements maxed out, the rough edges (a la MBV) smoothed out, and fueled by atmospheric guitar courtesy of the Verve's incredibly talented guitarist Nick McCabe. Yet, from the first song to the last, the album felt like a bit of a journey, perfect for late night (very late night) ruminations of twenty-somethings from an inbetween generation. I present here the first and second perfect tracks that set off the album. Just brilliant stuff. This is without par one of the greatest opening album tracks for a new band:

And the second part of the 1-2 punch goes into "Slide Away":

I bring these songs up because the Verve is re-releasing their first two (both wonderful) albums, A Storm in Heaven and A Northern Soul, as deluxe editions. More information here.

Neither of these two albums had the song that I so desperately wanted to identify, that soundtracked the movie Nadja. But I eventually found it, much later, in 1998 or 1999, I think! The song was "One Way To Go," the b-side of their very first single ("All In My Mind"). And when I finally heard the song in full, my expectations were fully justified in the sheer gorgeosity of the sound:

Heavy stuff today. The Young Gods were a band from Switzerland who sang mostly in French. Actually, scratch that, I just discovered that they still exist. In any case, I used to listen to them mostly in the early '90s. Very electronic, very heavy, industrial music but tempered by a bit of experimentation. In other words, it wasn't the kind of industrial made famous by Ministry or Revolting Cocks and bands like that. Although they are not as famous as, say Nine Inch Nails, I would say that Young Gods were incredibly influential for a whole generation of electronic musicians. David Bowie, for example, once name-checked them. The band has been around since 1985, with their tenth and last album, Everybody Knows, out in 2010. There are a lot of good abrasive Young Gods songs but I present here "L'amourir," the second single by the band, from 1988, which was later added to their excellent album L'eau rouge (1989), which in my opinion remains their masterpiece.

Here is the song "Old Shit/New Shit" from the sixth studio album by Eels called Blinking Lights and Other Revelations (2005). The album (which had 33 songs) was pretty amazing but this song seems particularly appropriate today. The main architect of Eels is, of course, E (real name: Mark Oliver Everett). The lyrics to this song here. In case you want to know more about Eels, see here and here. They've had a pretty long career, now over 20 years and 11 albums, and are based out of Los Angeles.

This is a song ("Black Window") from a cassette-only release by Auscultation. The album, L'etreinte Imaginaire ('imaginary embrace") can be purchased here in cassette form (obviously) or as digital files. Auscultation is an Oregon-based musician named Joe Shanahan. An earlier release, cleverly titled S/T, came out in 2014. Reviews of L'etreinte imaginaire here.

This is John Beltran's "Soft Summer" from the album Ten Days of Blue (1996). The track was also featured on the compilation Lush Life Electronica (2001).

Posted by spaceman at 5:15 AM No comments:

This was the standout track from Massive Attack's album Heligoland (2010). I've been a fan of them for a long time and I think I saw them live in New York... in 2006, I think. Critics tend to favor their early stuff but I loved their two mid-period albums Mezzanine (1998) and 100th Window (2003). Both have the triphop vibe but feel a bit more swampy and dank. Definitely worth checking out. Here is "Paradise Circus" which has an X-rated video online somewhere (easy to find). But I'm just posting the basic track which has Mazzy Star's Hope Sandoval on vocals.

I don't remember when or where I first heard this song but it was probably in my junior or senior year of college.

"Maybe when I'm older
What do you think I'd see
If I could walk away from me."