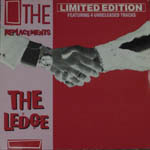 A couple of months ago, I managed to track down a very rare piece of music. I don't normally buy that much music anymore, but in a fit of I-don't-know-what, I decided to splurge something like $71 for six songs. Six songs I have heard before and have somewhere, at least on ancient cassette tapes. In 1987, the band the Replacements released a double 12" single only in Germany that had four rare b-sides. I am not sure why they chose release this stuff only in Germany (maybe so I could buy it 20 years later for an obscene amount of money) but they did. Bastards.

So, for about 20 years, I'd been desperately trying to track this mythic thing down. I'd managed to get pretty much everything else by the band. But this one thing remained. I scoured record stores (back when there used to be such things). I'd do absurd Google searches. Nothing. I'm not even sure why I bothered to try and find it. I rarely listen to the Replacements. I don't even like that kind of music anymore. But it was, you know, some sort of lame attempt at grasping-for-youth or worse, a small material object to make me happy. Blah blah. Twenty years went by.

So, in May or June or whatever, I managed to track it down on-line, forked over $71 and lo and behold it arrived at my house a week or so later. It was like chocolate melting in your mouth. I cleaned it lovingly, played all four sides a few times. I'd heard all the songs before so it wasn't like a revelation or anything. But it was nice to hear the songs (which, at least the b-sides, weren't that stellar) in their original pristine glory.

Later, more recently, I discovered that someone had left my double 12" on top of my cable box attached to the TV. As one knows, cable boxes are hot. They give off heat. Since my Replacements vinyl had been sitting on it for months, naturally, both the records warped beyond....well, beyond playing. The records look like waves of plastic.