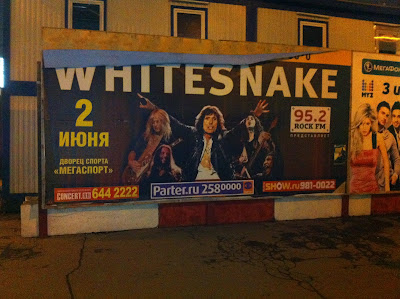 Well, it's my last night in Moscow. Goodbye to Russia and all that. For some reason, Moscow makes me tired in a way that New York doesn't. I've been here a week and I feel exhausted. Walking the streets of Moscow, you see posters for lots of shows coming up: System of a Down, Roger Waters (doing The Wall!), Whitesnake, and Shakira. Yes, I have now mentioned both System of a Down and Whitesnake in my blog, and I did not do that out of irony. I took the picture on the left on Wednesday, walking near the U.S. embassy on my way to the nearest subway station (Smolenskaya). Whitesnake is playing Moscow on June 2. I would imagine that the guy in Whitesnake is, like 70 years old. But that seems like a small obstacle to be able to do "Here We Go Again" in Moscow, right?

Like any major big city outside the West that is caught in the whirlwind of swift-paced 'modernization,' Moscow is a bundle of contradictions. But I think, more than any other place I've been to, it thrives on kitsch but without the self-consciousness of knowing that it's kitsch. In other words, there's lots of bad taste in Moscow. That doesn't mean that people don't do haute culture or whatever you wanna call it. There's an abundance of that. But once you get below the radar level of say, a Mozart opera or a exhibit about Suprematism, it's pretty much a straight nose dive to, um, the Black Eyed Peas or Talo Cruz or whatever. Or the exhumed corpse of bad Whitesnake (yes, back in the mid-1970s, there was a brief moment---mind you, a very brief moment---when it was thought possible that Whitesnake might be a respectable band, having emerged out of the cadaver of Deep Purple, an actually good band; but alas Whitesnake's future hand in single handedly inventing hair metal has made us all forget that moment).

But there are, of course, people who like decent pop culture here. I remember that Laika played here back many years ago. I think the reunited Swans played here recently. I see that a lot of bands/musicians go through here, tap into the subculture, and then leave. There's cool stuff going on in Moscow but it's a bit difficult to track down.

One of my favorite tracks on the iPod here in Moscow was the Besnard Lakes' "Albatross.' This is a band that plays big music. They are the bastard progeny of My Bloody Valentine crossed with circa 1966 Beach Boys. Based in Canada, they put out one of my favorite albums from last year, The Besnard Lakes Are The Roaring Night. Apparently a husband-and-wife team affair, kinda like Thurston and Kim. Or Bert and Ernie. Crank it up and get washed over by the wash of candy fuzz distortion. Goodbye Moscow. Enjoy 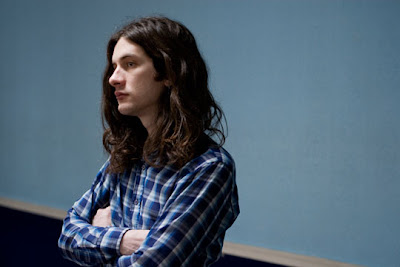 Back when I lived in Pittsburgh (circa '99-ish), I tried recording a whole bunch of my songs on a 4-track TASCAM cassette model. I was on a roll. But it was really hard to translate the music I was hearing in my head onto the thing that I would hear back on a cassette or a CD. I wanted something that was a little world-weary, something low-fi, sometimes very heavy, sometimes soft. I recorded a lot of songs and some of them came out OK--about 15 songs.

Well, recently James asked me to review the new Kurt Vile album for the next issue of Inflatable Ferret which I haven't gotten around to yet (oops). Vile has long curly hair and his new album is called Smoke Ring for My Halo, almost as good a title as his last one, Childish Prodigy. Either way, been listening to Smoke Ring for My Halo a lot this past few weeks, and here in Moscow too. Russian subway trains are way too loud to listen to music so it's mostly out in the dreary streets. I keep coming back to this one song, "On Tour" which I found really reminiscent of something, but it turns out that it's actually reminiscent of nothing real. It's just reminiscent of the sound I was trying to get when I was recording songs in '99. This is the sound. The vocals are not really anything I would have done (he sounds a little like Tom Petty) but the sound, the guitars, the drums, it was in my head. So it feels really comforting to listen to it now, like an old friend or something. The song seems quite simple on first listen it has these little embellishments that slowly gather steam and stand out after repeated listening. I love the bells-chime-y electric guitars that play over the acoustic guitar background through the song. They achieve a kind of state of grace that's kinda mesmerizing.

The facts: Smoke Ring For My Halo came out last month (March 2011) and is a most delicious album. Kim Gordon of Sonic Youth likes him. He's on Matador. His recent show with his band, the Violators, at SXSW is archived here.

Here in Moscow, something made me think of this song.
Apparently, the last song he recorded right before the deed.
Quite amazing, actually.

Posted by spaceman at 4:33 AM No comments: