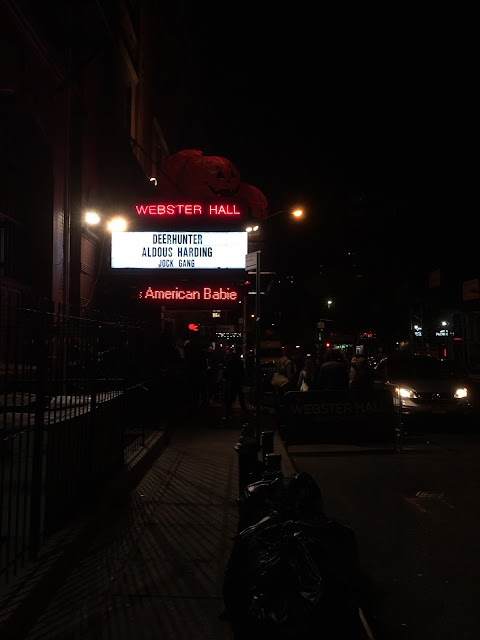 So, 15 years ago, today, I moved to New York City. Lots of things have changed since then. Lots of things haven't. I suppose I could write a long philosophical exegesis of my time here and what it has meant, but that would be boring. But I can add a bit of context: for some bizarre reason, I used to write a journal in 2001, and here is what I wrote tonight, 15 years ago:

As I drove [my car] on the NJ Turnpike, my emotions ran the gamut of sheer euphoria and excitement, to sadness and despondence. From hope for a new life to wishing my car would just veer off the freeway [into] some conflagration. Each feeling lasted seconds. Nothing too serious. But dusk on the NJ Turnpike (generally an extremely ugly stretch of America) was awesome. I arrived in this city alone. And that will prove to be the best part of all of this. I did it all by myself!


Anyway, I was trying to think back to what music I was probably listening to those days, and I can't really remember the fall of 2001 in terms of music (although I did see shows by Orbital, Tool, and Spiritualized). One song that I was listening to a lot in 2002, in the year after my arrival, was "NYC" by Interpol from their debut album Turn On The Bright Lights, one of those inexplicable albums that are brilliant despite being completely derivative (and it's worth noting that the band never came anywhere close to the halcyon heights of that album in anything they ever released subsequently). The Village Voice had a pretty good summation of the song:

So in commemoration of those 15 years -- and to all the people I knew in those early years, you know who you are -- here is "NYC" by Interpol: 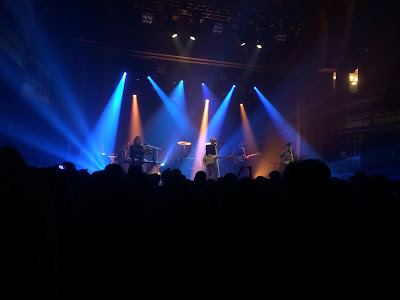 Last night, in more of a coincidence than anything else, I saw what was without doubt my best concert of the year so far, Deerhunter, who were playing Webster Hall near Union Square. The show was outstanding, just fantastic. I've seen Deerhunter before, but this time, the band was just totally on, without any kind of fucking around, from start to end, on point, demonstrating once again why Deerhunter remains probably the best and most versatile guitar rock band in America today. Guitar rock is hardly very trendy these days but Bradford Cox and his crew reveal a deep commitment to the possibilities of that instrument, straddling carefully the line between utter abandon, whitenoise, frenzy, and distorted bliss (think Sonic Youth and MBV) on the one hand, and the sheer confectionary joy of the three-minute pop song (think Motown + Big Star) with lilting verses and hookladen choruses. Although their album Microcastle (2008) remains my favorite of theirs, ALL of their albums are worth getting, each containing at least half a dozen killer pop tracks that other bands spend entire careers working towards. 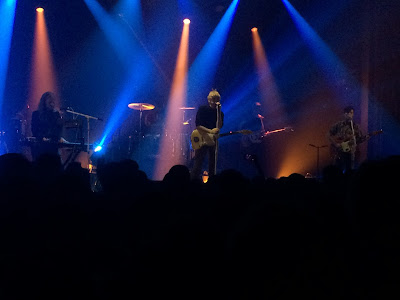 What made last night's show amazing was the band's ability to surprise. They've now added a live keyboard/saxophone player (Javier Morales) who adds a lot of funk to what was ostensibly four-on-the-floor rock krautrock attack. We got some really jamin' funky workouts in the show, hinting at perhaps the future trajectory of the band. An album of Stevie Wonder covers?

Anyway, in honor of the Deerhunter show but also the beginning of my 16th year here in New York City, I present two songs by Deerhunter. The first, the opening track on their last album Fading Frontier (2015), "All the Same" is a lilting indie rockish meditation on letting yourself go, and not getting too attached to anything (including a place):

My home, anywhere
Expect no comfort, save for air
Take it anyway
I could leave or I could stay
Wouldn't matter much to me
Much to me

The second, which I've posted,probably a few times over the years on this blog, is a live version of "Nothing Ever Happened," the epic lengthy track from Microcastle which has been a sort of concert closer for the band for many years. Here they are, playing the song in a 12-minute version at the Pitchfork Music Festival in Chicago in 2012. Behold:

Neil Young - Pushed It Over The End 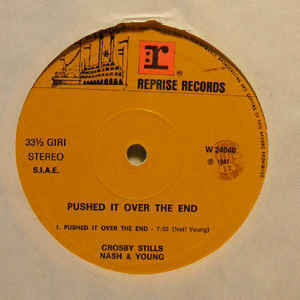 I started this blog about 10 years ago! My first post was on April 24, 2006 and it sure was a good one. But the very first song I ever talked about on this blog, in a post that July, was a song called "Pushed It Over The End" written by Neil Young. Now, more than 10 years later, I am coincidentally listening to that same song and STILL blown away by it. What's so fucking great about this song? Let me quote myself from ten years ago:

His guitar playing is pretty, understated, but incredibly communicative. You hear it, you almost feel like you're teetering on the edge of something ("pushed it over the end," after all), and then you tip over and make the long deep fall, all the way down. That's exactly how I felt hearing the song before I even knew the title of the song.

What's the story behind the song? I think Neil wrote it sometime in 1974, and did a full-band version of it with Crosby Stills Nash and Young on their (in)famous cocaine-fueled 1974 tour. He also did an acoustic version of it during a solo tour later that year. Then he just kinda dropped it. Never released it on an album. Never did anything with it. This was literally one of his best EVER songs. I'm not kidding -- in his entire 50 year career, I would rank this as one of the most brilliant songs he ever wrote. And that's saying quite a lot, given his ability, especially in the late sixties and seventies, to just rattle off classic after classic without breaking a sweat.

"Pushed It Over The End" was a strange elliptical meditation on the existential malaise of the mid-seventies, filtered through allusions about Patty Hearst, Nixon, and God knows what else. This was a song about the intersection between love and politics, about how relationships can be abstracted through politics and vice-versa, how some of our most self-destructive urges can sabotage the best things in life until they are (literally) pushed over the end (edge).

Playing background to the almost incomplete lyrics flush with disjointed imagery, was a skip-stop-start waltz-y rhythm (one person called it a "junkie waltz") that never quite gels, it just wobbles through the first couple of minutes until it momentarily gets a firm backbeat and stands tall. And then all of a sudden, it's back to the wobby skip-start-junkie waltz again.

His guitar playing sounds like a musical virtuoso on one instrument is learning how to play another. The lead guitar solo (beginning at 3:05) is nothing much to speak of, a sequence of utterly sloppy notes played up and down the guitar neck, strings bent here and there, but THEN at one point, he holds the same single note as a vibrato for, like, 10 freaking seconds flat (start listening at 3:30), it is absurdly intense, like you just want to stop breathing - just like you imagine when you are pushing your favorite relationship over the end. Your head hurts and you can't breathe, but you are just compelled to try to fuck things up. It's like an aural equivalent of that.

All of this was recorded live on a CSNY live date in 1974 (August 27, 1974). Young later added a few choice overdubs - apparently vocals by Crosby and Nash -- but the recording still sounds spartan. At some point, in 1976, Young had apparently wanted to include the song on his greatest hits-type triple album thing called Decade. The liner notes for that song were even written up:

Recorded live on the road in Chicago, 1974. Thanks to Crosby & Nash's help on the overdubbed chorus, I was able to complete the work. I wrote it for Patty Hearst and her countless brothers and sisters. Also, I wrote it for myself and the increasing distance between me and you.


As you can guess, the song was dropped from Decade at the last minute. The liner notes were erased. And because Neil Young is completely crazy, when he did issue the song, he made it available ONLY on a single-sided Italian 12" single that was released in 1981 and which NO ONE bought. Anyway, this Italian objets d'art is worth gobs of money. I recently bought a copy for $100. Yes I'm that insane. It's the most expensive song I've ever bought in my life.

It's worth noting that this song is now actually (finally) officially released as part of CSNY's recent live chronicle of the 1974 tour, called CSNY 1974. There is even a video of the song in a DVD in the collection. However, the version on there is VASTLY inferior to the version on that strange and rare Italian 12" from 1981. Fortunately, you can hear an (albeit poor quality) version of the prized Italian 12" version here:

And I would be remiss if I didn't mention that some actually think that a third version of the song, an acoustic version which Neil apparently called "Citizen Kane Junior Blues" (because why not) is the BEST version out there. You decide.
Posted by spaceman at 12:10 AM 2 comments:

Glenn Campbell - By The Time I Get To Phoenix 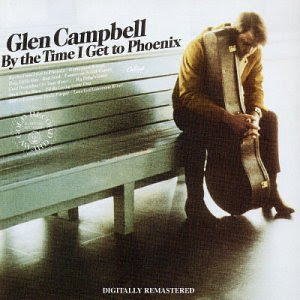 Since I'm on the theme of childhood music, a friend (thanks Patrick M.) recently reminded me of Glen Campbell and the recent documentary about him, I'll Be Me (2014). I haven't seen it but the conversation took me back to my very long-ago childhood, when I was probably 3 or 4, in my parents' house in Bloomington, Indiana where there was a copy of Campbell's album By The Time I Get to Phoenix (1967). My parents' music taste was a mix of Tagore music, classical Indian music and an eclectic smorgasbord of country and western, pop, folk, and rock (Glen Campbell, Linda Ronstadt, Jim Reeves, movie soundtracks, and yes, even the Beatles).

This album, whose cover I probably stared at for hours, was played all the time in the house. Most of the songs were covers, which was the m.o. of most country musicians at the time, but the music, so universal and timeless, somehow remains lodged in my psyche decades later.

I remember particularly "Homeward Bound" (a cover of the Simon & Garfunkel song) and "Tomorrow Never Comes") but the real standouts were the title track, "By the Time I Get to Phoenix" the old standard written by the great Jimmy Webb which Campbell made his own. The other was "Cold December" written by Alex Hassilev of the defunct The Limeliters, a folk band who had a few hits in the late 1950s/early 1960s. Both songs highlight Campbell's voice -- kind of like the Jimi Hendrix of country and western vocalists. There's also Campbell's guitar playing which is subtle and sublime.