Purely by coincidence, I am reading three books on or related to the Smiths. I am reading them simultaneously. They are:
They are all worth reading, each for different reasons.

And not by coincidence, I purchased a copy of The Smiths Complete box set which contains all the albums (8 CDs) they released while a working band (although missing many other stray tracks). I was not insane enough to buy The Smiths Complete (Deluxe Edition) which runs for $500 and is a vinyl version of the CD version with a lot of bells and whistles added. 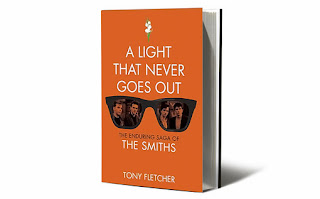 I also made a playlist on my iPod that lists every single Smiths song (including every single obscure b-side, compilation track, radio session track, etc. etc.) in the exact order it was released to the public. They released 122 tracks as official releases. It plays for over seven hours.

I also made a playlist of about 40 songs that were otherwise unreleased, i.e. various bootleg tracks, including many songs in alternate studio versions.

I also saw Johnny Marr in concert earlier this year in New York. He was fantastic.

I also spent a few hours on Youtube watching Smiths performances and recent interviews with Morrissey.

I've read many reviews of the new autobiography by Morrissey. Including one by Tony Fletcher, which was quite good.

What have I learned from this immersion?

Let me think about this. Will get back.
Posted by spaceman at 2:03 PM 2 comments:

In a random thought of the day, I just realized that almost all of my professional colleagues are on Facebook and Twitter and actively participate in both. I am on neither. And this made me think that maybe I'm being less of an academic than I should be. Like I'm just screwing around and they are talking about important things and exchanging links and articles and essays and names of books and cool websites. While I'm just hanging around in my underwear, eating donuts, and making lists of favorite Screaming Blue Messiahs albums ordered from best to worst. (Yes, I know they are a band from, like 50 years ago. I'm an old man, what can I say).

I used to be on Facebook. I had 300 friends or something like that. But I don't remember much about it and I never think about Facebook that much anymore.

But then I came to my senses. I realized two fundamental things: (a) Nothing that ever happens in my life or my brain is interesting and (b) I'm not a social being. If you combine those two things, there's no reason for me to be on Facebook or Twitter.

So I felt much better.